On fulfilling the computational language requirement 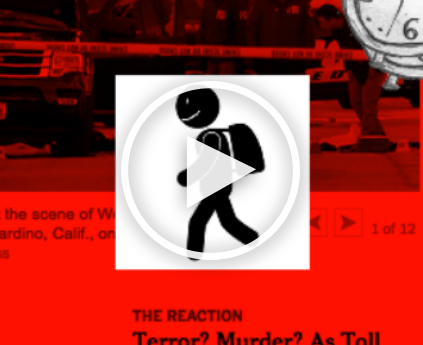 As a demonstration of proficiency in a computational language, I am submitting to the Curriculum Committee “Knowledge Productionz,” a computer game which reflects on one of the more troubling aspects of student life.

“Knowledge Productionz” was created on the day of the 355th mass shooting in America this year, and was made possible through the skills and encouragement obtained at a Code Liberation game design workshop hosted the night before. On this day, as per usual, the world bled while the faculties and energies of graduate students such as myself were all but chained to the daily grind of grad school life. While I have been enormously grateful to take part in the community sustained by our educational institutions, there are times when the game of academic life feels more geared towards serving the needs of an insatiable bureaucratic system than engaging with the transformative power of critical thought. In this process, it has seemed to me, that our thinkers have very little time to think, and much less to sit down with one another and remember the world in which they wanted to live. While the headlines poured in that afternoon, I busied myself almost helplessly in the relentless demands of the long, drawn-out competition called academic job security. Such busyness always feels to me uncomfortably close to the thoughtlessness which Hannah Arendt has famously offered as the very definition of evil. But it is this busyness-approaching thoughtlessness which also seems necessary for academic survival. The implications of this observation are terrifying not only for graduate student life considered on its own, but for the conditions of participation within our political situation at large.

I am introducing my submission with this short preamble in order to explain the series of constraints and demands which led to the project’s particular form, and why it is that a seemingly toy-like computer game provides a strategic medium for expressing both my programming language proficiency and a critical engagement with my intellectual pursuits and the professional academic space in which I operate.  My work, on both accounts, is largely concerned with the ways that the university fails to promote participatory consciousness among its students (across all levels) with regards to technology in general and the technology of learning in particular. This failure not only impedes upon the quality of education itself, but is sadly continuous with and further entrenches the passive and apolitical consumerism which shapes technological development at large today. Thus, my work has not been focused on utilizing any specific programming language or technique, but rather on articulating and fostering an attitude towards technology which promotes criticality, creativity, inclusiveness, and democratic participation. These activities have included working on a wide range of digital humanities projects, teaching multiple digital skills, attending a variety of digital workshops, and conceiving of a software project which has now received almost $60,000 in grant funding. And yet, to my surprise, there was no easy way to consolidate this broader kind of experience into a product which demonstrates proficiency in a language essential for my dissertation research.  Thus, at this late stage in the graduate program, it became necessary to design project that might, in the short amount of time that remain, satisfy the requirement.
However, given the anxieties I detailed above, I did not want this requirement to become one more exercise in busyness which further alienated me from both the world and my private cares. Thus, it became essential that this demonstration of proficiency in a computational language also expressed–however imperfectly and unprofessionally–some aspect of the personal and political frustrations of student life that are all too often stifled by the very conditions of participation. Not only was it important that this game display how “cold, unfeeling code” could express unarticulated and suppressed emotions for the purpose of collective reflection, but also demonstrate how coding under the conditions of community and inclusion can dramatically transform our technological imaginary and its purposes. As I already mentioned, this particular project came out of a game design workshop in which two wonderful instructors, Adelle Lin and Rachel Bazelais, walked us through building “Unicorn Eats Ice Cream,” which I then used as a model for creating “Knowledge Productionz.” It has only been through the community-oriented, civically-minded, and inclusive efforts of people and organizations both such as manifest in this workshop, that I myself have begun to feel deep excitement about the potential for technology to express the plurality of our communities, values, experiences, and desires. I hope that the Committee will take “Knowledge Productionz” as evidence that I understand how to set variables, create loops, close brackets; that I can indeed follow instructions to make a new set of instructions. I hope also that this modest defense, developed under its own strict set of limitations, helps encourage the struggle to reclaim the sites of both technics and thinking, in academics and elsewhere, for life.